CONVENING NOTICE
The Annual General Meeting will take place at Bedgrove Junior School on THURSDAY 26th MAY 2022 starting at 7.00 p.m.

In accordance with the constitution of the Choir, one third of Officers and Committee Members relinquish their appointments at the end of the meeting. They may stand for re-election along with any other nominated candidates. The list of Committee posts together with the names of members who are currently in post, those who are resigning, and those standing/nominated to date for election/re-election to the committee in any capacity this year is as follows:-
Membership of the Committee, in any named position or without a specific role, is open to any member of AFC. If you are interested in joining the Committee or would like to find out more about the management of the Choir, please speak to Mike Elliott or any committee member.

Please ensure that the Secretary receives written nominations for all candidates not later than Thursday 12th May 2022.

In order to arrange the agenda so that enough time is allowed for discussion, please let the Secretary know not later than Thursday 19th May if you wish to raise any matter at the meeting. Items raised without prior notice may have to be referred to a subsequent Committee meeting.

You can download a nomination slip for the Committee here:

Download File
November 2021
CAR PARKING
Car parks in descending order of proximity to Aylesbury Methodist Church.
(Those marked with a * now have the facility to use either the RingGo or GroupNexus app using your mobile).

If you would prefer to download this information to read offline, you can download it as a PDF file here:

Download File
It may be helpful to use this map to locate the listed car parks in relation to our normal concert venue of Aylesbury Methodist Church. Click on the image for an enlarged view. 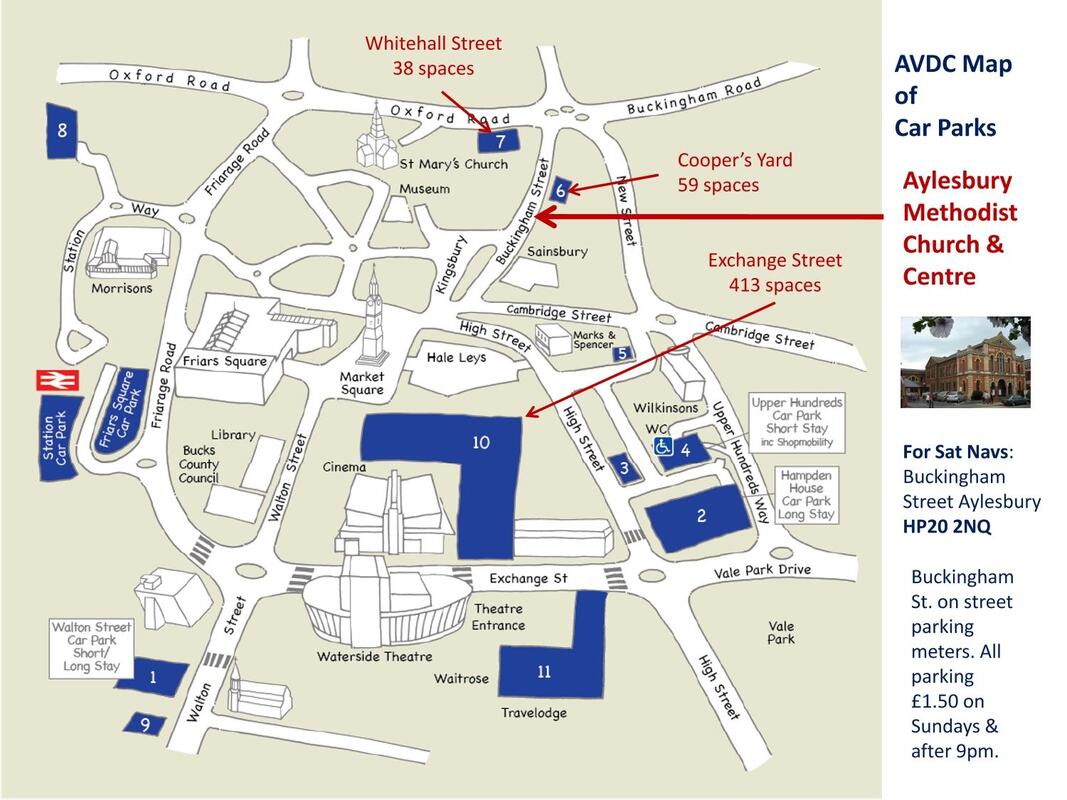 1 Apologies for absence had been received from Brenda Horne, Bob Shellard and Tim Francis.
2 Minutes of the previous meeting held on 27th May 2020 had been distributed and no comments received. Acceptance of the minutes was proposed by Alan Hamilton, seconded by Joan Woodward and unanimously agreed.
3 Treasurer’s report
Lyn Williams presented his report as follows:-

First of all, a few comments on last year’s accounts, which I commented on in detail in my report for last year’s AGM (based on provisional accounts). The spring term was affected quite badly by the Covid-19 pandemic, so we were unable to hold our spring concert or our quiz night. We therefore ended up with a small deficit of £484 for the year.

Regarding this year’s provisional accounts – as usual, these are not finalised as the financial year ends in August, so they include a number of estimates.

The year has been affected even more by the Covid-19 virus and resultant lockdowns, with no spring concert, no quiz night, and no physical AGM. Through Nick’s impressive technical expertise, we were fortunately able to hold rehearsals virtually, not only for the autumn and spring terms, but also for the summer term as well. Key points to note are the following:

Both income and expenditure relating to concerts were zero for the year.
In order to encourage as many members as possible to take advantage of our virtual rehearsals, and also in recognition of the fact that members did not derive full value from the subscriptions they had paid for the spring term in 2020, our Committee decided not to charge any subscriptions at all for the autumn term. The Committee also decided to charge reduced subscriptions for both the spring and summer terms. With only half of our normally active members attending at best, this resulted in total members’ subscriptions being reduced from last year by more than 75%.
The lower level of subscriptions also led to a substantial reduction in expected Gift Aid received.
Fundraising income was reduced by just over £400 compared to last year. £300 of this was due to no income being received from rehearsal refreshments or from carol singing, the remaining £100 arising from some members having left the 100 Club.
Partly offsetting these losses was a very welcome increase in donations received of over £300 to more than £500. Of this amount, £361 arose from Rowena’s charity run, the proceeds of which she very generously shared among the various choirs she works with.
On the expenditure side, apart from the cost of concerts and music hire, costs were very much in line with last year.

The result of all this was a (provisional) deficit for the year of £3,965, compared to the £484 deficit in 2019/20. Fortunately, we still expect to have around £16,000 in the bank at the end of this financial year – an excellent foundation on which to build in the coming years.

Acceptance of the accounts was proposed by Viv Bailleux, seconded by Kate Atherton and unanimously agreed.

This is now my 5th AGM report for AFC - and what a year it has been.
The repertoire we have covered has been huge and varied: Fauré’s Requiem, Christmas Carols, Mozart’s Requiem, Haydn’s Nelson Mass, Dvorak’s Mass in D, extracts from Bach’s Magnificat, and a selection of shorter pieces by Hassler, Schubert, Mendelssohn, Holst, Gershwin & The Beatles.
The performances have varied very little in terms of quality - all top notch actually - although the one slightly flat note from the tenors in the Mozart was slightly annoying.
Of course, I’m referring to the carefully curated commercial recordings that you have been singing along with. I have no idea what has happened to your voices in the 17 months since we last sang, but I DO know that it will be an exciting adventure as we meet and sing together again.
We have much to look forward to in the next season: getting back to our Monteverdi, Telemann, Haydn & Vivaldi programme, and a Spring concert full of Folksongs, Vaughan Williams and Gershwin! There is a plan in place with music programmes right through to the middle of 2023. It’s going to be a thrilling roller-coaster ride with something for everyone along the way.
It has been an incredibly hard time for professional musicians – a significant percentage of whom will now never return to doing what they love most. AFC’s support of the professionals engaged to perform for us in May 2020 was generous and very much appreciated!
I have played publicly just twice in the last 18 months – sadly, both occasions were funerals – but I have been very fortunate in being able to continue with AFC on Zoom and therefore receive rehearsal fees. My sincere thanks to you and the committee for being willing to continue in this way. To be completely honest, I don’t think (financially) we’d have made it through without this support.
I have enjoyed getting to know AFC members much better during this time (hurrah for breakout rooms!) but I have very much missed those who were unable to join us. My hope is that the existing friendships, plus those forged during the online experience, will make AFC an even stronger family when we are back together again.
A huge “thank-you” to Rowena for all the work she has done in supporting you and me during this time, and my sincere thanks to the committee for their continued friendship, advice, and help.

“There’s only one thing better than music – live music.” (Bukowski)

Here’s to the year ahead!

We’re holding this AGM towards the end of what must have been the most unusual, and difficult, year in the history of Aylesbury Festival Choir. Our hope to have an in-person meeting vanished when the Covid virus refused to play ball back in June, so we are online again. This is not what our constitution requires, but as we had already delayed the meeting as long as we could, under the same constitution, we are again opting to plead a special case for doing things differently.

The last year has seen three terms of rehearsals held virtually on the Zoom platform, including for the first time in years a Summer Term. In being forced online we have of course followed the approach of choirs throughout the United Kingdom. In spite of many campaigns, scientific studies, and indeed petitions, the government has held fast to its stand on amateur choir rehearsals. They have either been banned, or made too difficult for us to manage.

Through the year about 50% of our regular members have been able to take part in these online rehearsals, which have also featured periods assigned to social activities - just chatting really. Aware of the other 50% unable to take part, we have tried to remain in touch through regular newsletters.

Those of us who have been online have enjoyed the more personal time for practice provided by a sectionals format, and I am grateful to Rowena for her support in these, sharing that burden with Nick. This is an approach we are seeking to reproduce when we finally get back together.

However, for all of us, most thanks must go to Nick. Without his ability to master the technology, his enthusiasm in doing so, his eternal upbeat mood, and his choice of suitable music (with some serious backing groups!) we would have had a hard time.

We entered this period in a fairly strong financial position. The accounts we will present for your approval shortly only run up to August 2020 of course, so only show part of the picture of the damage to AFC financially, but I am confident that we have in fact weathered the storm. When all is done, your Committee will be assessing if any changes to our funding might be needed.

As I write (6th July), the Prime Minister has just indicated the end of all legal restrictions. So, barring any nasty virus variant arriving unexpectedly, we should indeed be able to meet again in September. I hope that all our members, including those who are not among our regular singers, will jump at this chance to sing out loud again. Our plans include a partial resumption from where we stopped (suddenly!) in March 2019, together with some revisiting of music we sang in the online rehearsals.

I expect we will all need some vocal retraining after such a long “quiet” period. How many tenors will find they have become baritones - or worse?

6 Election of Officers and Committee Members
To help us through the current situation due to COVID-19 restrictions, all committee members have once again agreed to remain in post at least until a normal meeting can be held. There were therefore no nominations and no elections held during this AGM. This contravenes one of the conditions of our constitution, but the committee regard these exceptional circumstances as justification. It may be that if there are to be any changes to the current committee, they can be covered in an EGM next term.

7 Any Other Business
Joan Woodward said she wished to thank everyone who has worked so hard to keep the choir well informed. The newsletter has been particularly helpful.

There being no other business, the AGM concluded at 7.55 pm and was followed by a “virtual” concert of the works rehearsed this term via Zoom. ​

Click on any image below to see an enlarged view
To give you an idea of the work our Press & Publicity rep gets involved with, here is our latest press release for return to live singing...
August 2021

...and here is the press release for our summer 'online' term

The Committee is pleased to announce that Sir David Lidington has kindly accepted our invitation to become President of the Choir. David has been a familiar face in our audience, and has been noted to sing along at times. More Handel coming up then...